Covid and more: A thinking society should not be engaged in fakery 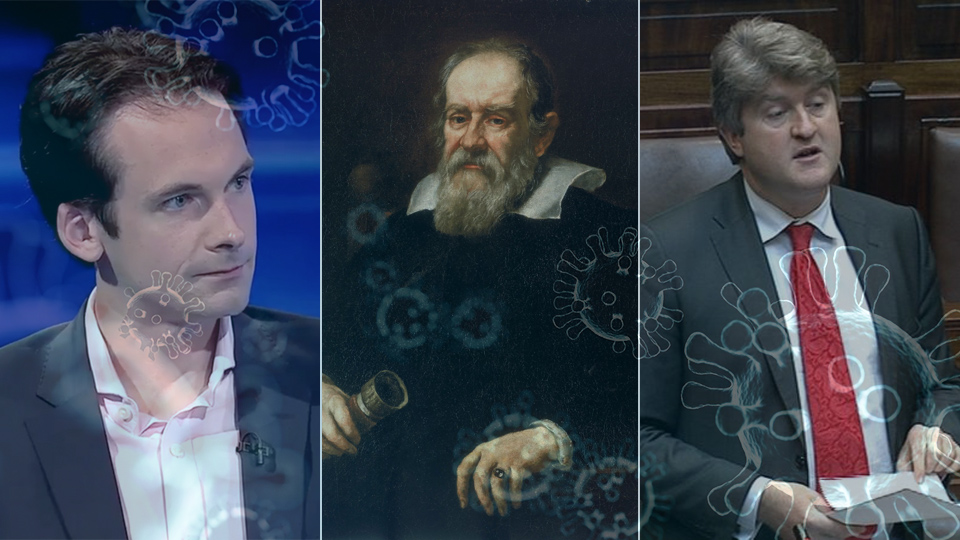 The recent ad hominem attack by Thomas Ryan, the Zero covid fan, on non-conforming scientists in a response to Independent TD, Michael McMamara, could be described as an approach designed to shut down challengers to the status quo.

The above represent an extreme and small fringe group of scientists who have been largely proven wrong. 99 % of the scientific community has a broad consensus on how to manage the pandemic. It's not rocket science it just requires political will.

Ryan dismisses Bhattacharya and Kulldorff with the well-known tactic of ad hominem attack coupled with the ‘legitimation by paralogy’; a theory that that the truth is determined by a consensus of a group of experts.

It’s a scheme which benefits establishment shortsellers, where they try to create a ‘hyper-reality’, on the basis that ‘everyone agrees with us’ and only the insane would differ. So we hear of arguments that revolve around just one killer point; that “97% of scientists agree” with a given position for instance. Now Ryan has gone one-better on this, where he says that 99% of scientists agree. QED, if you disagree, you’re crazy.

The fact is the establishment and their well-compensated lackeys are having a conversation which brooks no questioning, and the public are largely happy to go along with the fakery because it’s easier than thinking.

Of course the people who would think of themselves as the “thinking Irish” are not thinking. In a society of cognitive specialisation, they are outsourcing that faculty to specialists, and they assume that they (the corporate media and the voices of sanctioned experts) know what they are talking about and are revealing all of the information all of the time. The chances of both these being true are generally very slim.

The dishonesty of this so called conversation is a sight to behold. It was further exemplified by the Claire Byrne show’s “expose” of widespread conspiracy theorists and misinformation last week. What we witnessed was misinformation alright, in the form of entrapment. RTE’s transparent attempts of show trialling was called out on this platform and elsewhere.

The tactics of the media and the corporate and political elite are numerous, but they all serve to build a wall around their narrative.  The media has plenty of tricks for ‘disappearing’ a story. They include just never mentioning it; creating a counter-narrative; but perhaps the best trick is to mention it but pretend it is trivial. The last trick is the devilishly clever strategy of hiding it in plain sight. Think of Hunter Biden’s laptop, which the media still claim is nothing to worry about even though it is widely believed that “the big guy” who gets the 10% mentioned in all these payoffs from China and the Ukraine is the sitting president of America, Joe Biden.

It’s pretty much accepted to all the public that the media select the stories that will be the news from an array of news events. If it isn’t in the news then it isn’t news!

The logical conclusion from this is that they create the news (which would be acceptable if there were a heterogeneous media which presented different perspectives), yet the vast majority of the public accept that this constructed narrative is real.

As a thinking society, we are engaged in fakery. There are things you are not supposed to say and which are just ignored by the people of influence. And part of the construction of this illusion is the search and destruction of dissenting voices. There are people who watch hours of videos by the likes of Ivor Cummins just so they can ‘Rupar’ his statements. (“Rupar” it’s officially a thing defined by the Urban Dictionary and it means: “To purposely mislead. To completely mischaracterize a statement or video by omitting context”.  The verb was named after far-left Vox journalist Aaron Rupar.)

There are observations around the loss of freedom and the disproportionality of the covid risk/response ratios that you are just not supposed to say. To mention these unmentionable things is to draw the inquisitor’s ire. To be stigmatised like lepers, or denounced by the inquisitionary clergy as a Galileo.

These arguments and facts are not treated as legitimate. They are not allowed within the conversation.  They are unsayable. More precisely, they are heresies; and to say them makes you a heretic.

Respectable people have their ears closed to these arguments. It is a fake conversation, and the public who smugly swallow this dished up propaganda wholesale are engaged in fakery.

It’s part of the posture of being an intelligent consumer to be fake about these issues. To get on an RTE panel, you are most likely invested in a basket of narratives. These include “zero-covid”, “racism is everywhere”, “women’s interests are represented by radical feminism”, “toxic masculinity is everywhere”, “environmental catastrophe”, “ the church is a singularly malign thing and its demise is to be celebrated”, “there is a right wing threat under every rock”, “Savita died because she was denied an abortion” , and more.

It is an ingrained habit of the Irish intellectual to pretend that none of this has been countered by rigorous reviews of the actual facts.  For many people, if it’s not agreed by the corporate media it’s not true, and couldn’t be true. This is the cathedral of the secular institutional elite.  The only reason to acknowledge that voices outside this Cathedral exist is to seek out and destroy Galileos. That’s the job of the fact-checkers; the latest form of institutionally-sponsored propagandists.  They are seekers of heresy. Professional, secular, witch-finders.

Take the case of Savita Halapanaver, the most powerful narrative leaver in the readying of public attitudes for the removal of the 8th amendment. The claim that some (then anonymous) hospital worker said that Catholic Ireland would not allow an abortion to save a woman’s life, was the most manipulative and misinforming story ever devised. The story that was mostly buried told a different story: that she died of a virulent case of septicaemia, and that a failure in hospital communications meant that she never was prescribed treatment that could have been prescribed early enough to make a difference. A review of her treatment shows that lab results of her blood teste were available on the Friday and were not acted upon with the recommended medical treatment over the entire weekend. By Sunday it was too late.

In contrast, another story that was hardly mentioned, as if it was too insignificant, was the tragic case of Tracey Campbell-Fitzpatrick, a woman who died from severe haemorrhage shortly after giving birth in St. Luke’s Hospital, Kilkenny.  Mrs Campbell-Fitzpatrick’s death didn’t generate much of a cry for reform, though the failures in her treatment held lessons that should have informed changes to maternal healthcare. Evidence, if that was needed, that that maternal safety is less important than abortion on the priority list of the elite.

In Ireland, people who view themselves as an intellectual cut above the rest are fed detailed narratives that are designed to properly mould worldviews and justify illiberal attitudes. These sources pretend to inform about reality.

However, the truth is that readers of the Irish Times, RTE, and other establishment media don’t consume these media to learn about the world or how events actually are; they do it to find out how they are supposed to feel about the world. Should they feel outrage, or should they throw their support behind the narrative/cause? Only by reading the Irish Times will they actually know.

The grafting of the legacy media editorial slant is nothing but posturing for those conscious of the currency of intellectual status, but not inclined to critically inquire themselves. When the thinking Irish outsource their thinking to the ideologically homogenous and politically correct media, the pretence is that they are thinking.  To make a metaphor of the case of Galileo, they are the inquisitors who refuse to look through a telescope.

FACT-CHECK: No, the Religious Orders are not ‘stalling’ on the Mother and Baby Home Redress Scheme