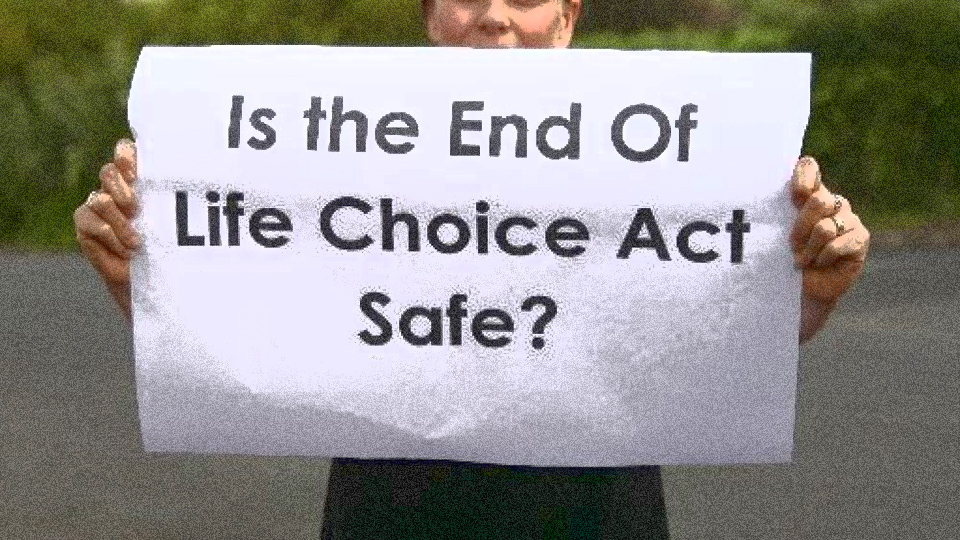 Among the roadside billboards canvassing votes for political parties and their candidates in New Zealand’s triennial election on October 17 is one announcing starkly: “LETHAL DOSE with NO assessment for coercion required.” Below that it asks: “Is the End of Life Choice Act safe?”

It’s the kind of silly question you have to ask when parliament has already passed a law allowing euthanasia and all the rest of us can do is vote yes or no to it in a referendum. Deliberately killing yourself, let alone empowering doctors and nurses to kill you, can never be safe; but when the majority of legislators insist that it can, you have to fight them on their own ground.

VoteSafe, the campaigners behind the Lethal Dose billboard, have highlighted an issue that should give everyone with a sense of their own mortality pause.

In a society where elder abuse appears to be common, including by family members, the EoLC Act only requires that a doctor acting on a request for euthanasia “do their best to ensure the person exercises their wish free from pressure”.

Do their best? Isn’t that setting the bar rather low? There is no formal requirement for assessing coercion. How good will that “best” be when the doctor hardly knows you, let alone your family? How much time can he or she invest in the whole process?

Despite open-ended provisions like this, advocates of the law maintain that it’s watertight. According to one recent poll almost two-thirds of New Zealanders would vote yes in the referendum. Leading political contenders from left – Labour Prime Minister Jacinda (Be Kind) Ardern – and right – National leader Judith (Crusher) Collins – both voted for the EoLC Act.

They and other MPs had the advantage of debating it in parliament and having to listen to the opposition’s arguments. It’s a safe bet, though, that 90 percent of Kiwis have never read the legislation that sails under the flags of “choice” and “compassion”, and many will be voting on the basis of superficial – or occasionally more serious but subtly biased – media coverage.

In fact, research shows that the majority of people know next to nothing about the Act apart from the fact that it legalises euthanasia.

“There’s a lot of confusion out there from people thinking that it’s around legal options which already exist such as turning off life support, do not resuscitate orders, the ability to refuse treatment, and palliative medication that may hasten death. But we’re not actually voting on that, we’re voting on the End of Life Choice Act.”

With voting only two weeks away, a poll by Curia Market Research found similar ignorance on this point, and on other aspects of the EOLC Act. Euthanasia Free NZ, the group that commissioned the poll reports:

Only 21% knew that this Act would not make it legal to have life support machines turned off, while 45% were unsure.

Only 18% were aware that terminally ill people who meet all the eligibility criteria, but also have depression or another mental illness, would indeed be allowed euthanasia under this Act.

Less than a third (28%) knew that this Act would make euthanasia available to terminally ill people even if they don’t have any physical pain. A third (33%) mistakenly thought that a person would need to have physical pain to qualify and 39% were unsure.

The End of Life Choice Act requires that a person experiences “unbearable suffering that cannot be relieved in a manner the person considers tolerable” but doesn’t require that this suffering be physical. A large Australian study found that 53% of people near death did not experience any pain.

About 41% of respondents assumed that the Act would require two witnesses when a person signs their euthanasia request in front of the doctor and about 40% were unsure. Only 18% knew that the Act does not actually include this safeguard. It only requires one “independent medical practitioner” in addition to the doctor assisting the suicide. In the assisted dying laws of Canada; Victoria and Western Australia; and nine US states, two people need to witness a person signing their written request in front of the first doctor.

How many voters know – what an article in the NZ Medical Journal points out – that the person requesting euthanasia doesn’t need to have had access to appropriate medical or palliative care? Or that there is no mandatory cooling off period after a request? Or that the individual, who might be a young adult, does not need to tell anyone about their decision?

In a year of plague and electioneering, Kiwis are being asked to vote on a piece of legislation that deals with the imponderables of “terminal Illness”, suffering and freedom at the end of life, as well as professional ethics.

Sadly, too many will tick a box that they think will save a loved one from dying in unrelieved pain, or suffering the indignity of lying helpless in a hospital bed connected to a respirator.