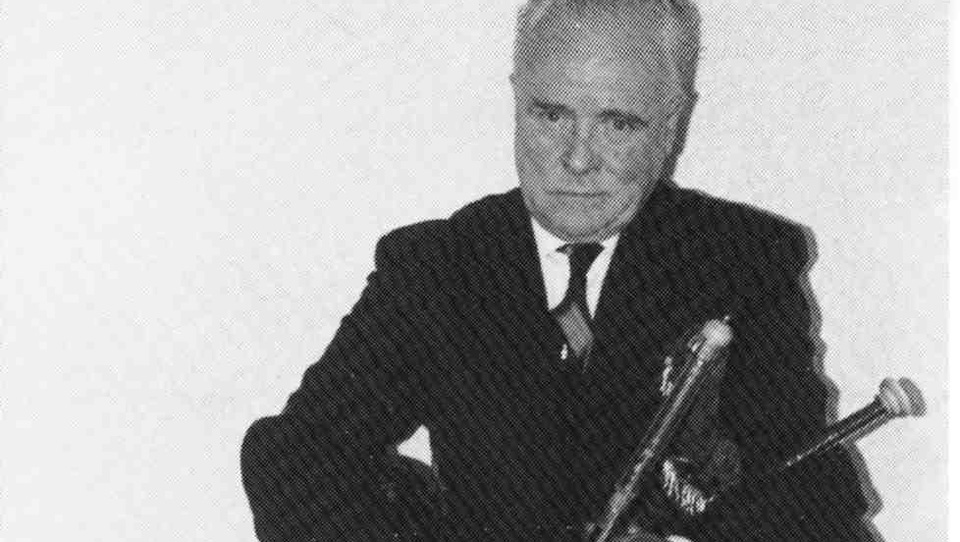 The internationally-renowned uilleann piper and maker Leo Rowsome has been honoured by a Dublin City Council commemorative plaque on the street where he lived and worked until his death in 1970.

Born into a piping family in Harold’s Cross, Leo Rowsome was the third generation of an unbroken line of uilleann pipers, who went on to become a teacher, pipe-maker, and performer.  His family have carried on the strong tradition and are amongst the best-known pipers in the country today.

As a performer he played all over the world, including at New York’s Carnegie Hall, and is credited wth being one of the pipers who helped to save piping from extinction.

Joining the Municipal School of Music, Chatham Row, as a teacher at the age of 17, he went on to teach generations of uilleann pipers, including  Paddy Moloney of the Chieftains, and Liam Óg Ó Floinn.

Speaking at the unveiling of the plaque on Belton Park Road, Donnycarney, Deputy Lord Mayor Councillor Mary Callaghan said: “Leo Rowsome was a household name in Ireland until his death in 1970, but he was also a Donnycarney man, and I’m honoured and delighted to unveil this plaque on the street where he made both his family home and his workshop”.

A founding member of Comhaltas Ceoltóirí Éireann, Leo Rowsome was also one of the founders of Na Píobairí Uilleann, and speaking at the event Gay McKeon, CEO of the organisation (and a past-pupil of Leo’s), paid tribute to him: “It is impossible to overstate the profound influence of Leo Rowsome on the preservation and development of the uilleann pipes. A skilled pipe-maker, a wonderful player, a successful recording artist, a prolific broadcaster and an authoritative teacher, Leo was a powerful advocate for Irish traditional music and uilleann piping. It is a source of great pride for everyone involved in Irish music that Dublin City Council are celebrating this significant cultural icon”.

Comhaltas hosts an annual event – Tionól Leo Rowsome – in his honour each year.

The Rowsome family lived at 9 Belton Park Road, Donnycarney, and Leo Rowsome’s workshop was in the back garden.

His daughter Helena thanked both the City Council and the people of Donnycarney, saying: “After spending the mornings in his workshop on Belton Park Road, my father would walk from the house to catch the bus on Collins Avenue to travel to The Municipal School of Music, Chatham Row and The Pipers’ Club, Thomas Street, where he taught many aspiring and later, renowned uilleann pipers.To be honoured in his native City, remembered by the Donnycarney community, and celebrated on Belton Park Road, where he lived, made and refurbished so many sets of uilleann pipes, is exactly what my father would have appreciated”.

The decision to erect the plaque was made by the Dublin City Council Commemorations & Naming Committee, whose chair, Councillor Michael Mac Donncha, said: “The Commemorative Plaques scheme allows the City to formally commemorate people who have made a significant contribution to the life of Dublin. Through his music, making, and teaching Leo Rowsome brought happiness and joy to Dubliners and to lovers of Irish traditional music all around the world. It is fitting that the City in which he was born, lived, and worked, honours him with this commemorative plaque”.

WATCH: Documentary on the life of Leo Rowsome

Brendan Mulkere, the fiddle virtuoso who taught thousands how to find the heart of music