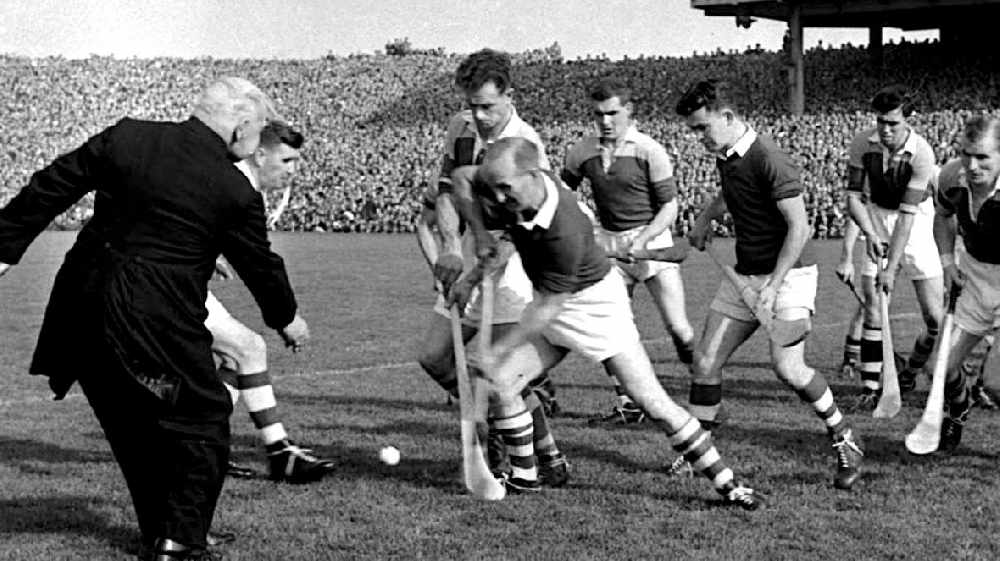 Last weekend’s Bloody Sunday commemoration by the GAA was a nice reminder of the GAA’s enmeshment in the warp and weft of Ireland’s history.

The events of Bloody Sunday 1920, and the name of Michael Hogan are part of the lore of Ireland and it was refreshing to see the GAA commemorate the event and its victims in a way that focused on Ireland, as opposed to some sort of woke inclusivity exercise.

(The Kildare decision to imitate the Marxist symbolism of “taking the knee” was a bit strange though. Why is submission an appropriate mark of respect to the victims of 1920?)

It’s enticing to think that the regenerative power of a sense of history gave the Tipperary footballers a thirst and belief in the imaginative possibilities of the moment.

Wearing the jerseys of 1920 and a picture of Michael Hogan on the sleeve, they wore their hearts on their sleeves too, and bridged an 85 year gap to take the Munster crown. They did this with an assurance and belief in their own potential that was a thrill to watch. Congratulations to the Premier men.  Michael Hogan must have been proud to look down on that victory.

2020 is also the centenary of the birth of another GAA legend, the Bold Christy Ring. Last weekend, Kildare, a minnow on the hurling scene, also showed mettle and skill and represented themselves admirably to win the Christy Ring cup.

For all its faults (and moving slowly is not one of them), the GAA has no shortage of people who led impressive and also very ordinary existences.

Brian Cody is an example of a man who might be comfortable to stay his entire life within his parish, and yet is one of the most inspired leaders of men that this country has. The GAA’s history of extraordinary people leading ordinary lives is what knits it into the identity of Ireland. Paul Rouse’s Hurlers gives some hilarious and fascinating insights into the GAA’s role in an Irish cultural awakening, in the formation of the modern Irish state.

He tells of a meeting in the early years of the organisation in Tipperary, where a gun shot was fired and the meeting ended in a brawl “between local republicans and priests”. What is evident from the history of the GAA is that its cultural activity was entangled with the creation of the lore of modern Ireland. It was also as much a part of the weave of ordinary lives as anything could be.

Imagine a marquee modern sporting event being contextualised as evocatively as this, from the eponymous ballad of Christy Ring written by Kerry’s famed author Bryan McMahon:

“When we were young we read in school how in the days of old,
The young Setanta showed his worth with shield and spear of gold,
As hurling hard on royal sward he’d hurling heroes fling,
My soul today, he’d yield the sway if he met Christy Ring.”

And of that memorable clash with Tipperary:

“Cork is bet the hay is saved the Tipp men loudly sing.
You speak too soon my sweet Garsún, for here comes Christy Ring.”

The GAA was part of life as much as the seasonal work on the farm was. Of all the names that enhanced the story of the GAA, and whose legend grew in tandem, Christy Ring may have been the brightest star. Christy Ring and Hurling were a match which illuminated each other equally.

Outside of hurling Christy led a modest existence. To keep the wolf from the door he drove an oil delivery truck, so you might have gotten a delivery of home heating oil on Monday from a man who would keep fifty thousand people fixated on his every move the following Sunday.

I lived two doors up from this man during his final years on this earth. To his neighbours there was no mystery to him. He represented himself and a traditional paradigm of the GAA in every fibre of his communal existence. Those alert, brilliant eyes, which are evident in photos of him on the field stood out. In conversation he was as quick witted and direct as his hurling on the field, and he was generous. He frequently gave my mother a lift across town to visit her mother when my Father was away working.

Tight family bonds were a feature of the time, that people depended upon in this time of tighter means, and Christy understood and respected that as much as anyone.

My mother recalled discussing an article in the papers about family breakdown with him. “You can’t do that” he said, offering his opinion without much hesitation. He had his reasons thought out as well and explained them; he was a traditionalist, not an unthinking dogmatic.

Ring was part of a generation that changed hurling. Maybe that’s not surprising as the game had only been codified a half century before and was still changing -as Ireland itself was grappling with the burden of freedom.

It might sound like a strange thing to say, but newfound freedom and how we as humans adapt to it is a challenge that many newly formed states collapse under. Booker T. Washington understood this when he pioneered Black education in the post bellum years in America.

Edmund Ignatius Rice did the same for the Irish 100 years previous to this, and in 1884 Michael Cusack helped enable a cultural sense of purpose when he founded the GAA. It wasn’t all easy of course. Cusack was at that meeting in Tipperary that ended in the row.

He was not deterred. A lifetime of experience and graft had taught him that culture is not easily built, but it is worth the effort.

BEN SCALLAN: Why is RTÉ a member of a climate change activism group?