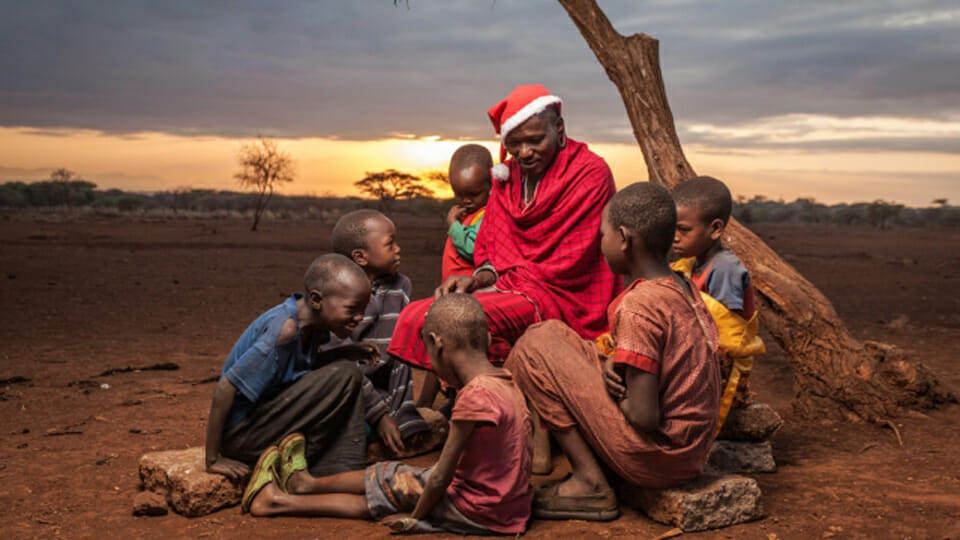 A tale of family traditions and the inculturation of a Christian feast.

My great grandfather was the first Christian in my family tree. I figure he converted to Catholicism around the time of the first World War. Like nearly all his contemporaries, he was polygamous. He did not quite get why he needed to leave all but one of his wives, and so his practice of the faith might have fallen short of the expectations of the missionaries.

However, he donated the land on which the sub-parish church and school in our village still sit. He also made sure his only son (my grandfather) and the other children, got a Christian education. Thanks to him, I was born into the Catholic faith, complete with a little Catholic grandmother who is now the matriarch of a community of almost fifty souls.

Thanks also to him, Christmas has meaning for me. Had he and his contemporaries resisted the strange new religion of the white man, I think we would now be preparing to witness a weird international occasion. Perhaps we would regard it with the same kind of indifferent curiosity with which we regard American Thanksgiving, if we regarded it at all.

Instead, Christmas became a tradition. In fact, it became so deeply rooted in our culture that it is, for a large number of Kenyans, yours truly included, a definitive source of identity and familial unity. I think this has everything to do with the fact that it became firmly embedded in the strictures of our communities.

Christmas, more than any other feast in the Christian or public holiday calendar in Kenya (yes, even more than Easter), is the greatest regular opportunity for the extended family to come together. Unlike traditional occasions of similar cultural weight, like marriages and funerals, it takes place at a specific time every year. That has allowed customs to be built around it to carry it through the course of time.

For instance, because most urban Kenyans would rather die than call their urban dwellings home, it has become a tradition that, for Christmas, they travel from the city to their ancestral villages upcountry. I have been in Nairobi during Christmas only a few times, and the city always feels unnaturally empty and slow.

Like a giant wet sponge being squeezed by mighty hands, the city empties out its residents into the countryside in a veritable deluge. Bus fares get ridiculously expensive. Bus stations get overcrowded. On the day before Christmas, it takes a minor miracle to get a space on an outbound vehicle. Buses that typically ply intra-city routes get called into long distance duty (partly because they would have no patrons anyway). Capitalism shows itself in all its opportunistic glory.

In the face of these challenges, more practical (and broke) millennials are nowadays increasingly tempted to forego the hustle altogether. Instead, they argue, it is better to just send the saved money home to help fund the festivities. Yet even they appreciate that this is a terrible choice to be faced with. After all, Christmas is about those moments spent together, even if the feast is somewhat materially modest.

Nevertheless, for those who stay in Nairobi with their families, the parks provide an alternative getaway. Uhuru Park, next to downtown Nairobi, is usually packed full of families seeking affordable fun. It is a tragedy that the government intends to hive off part of the park for an expressway.

The city is also so thoroughly modern these days, that many people (especially the aforementioned millennials) will spend the entire day alone, holed up in their apartments, bingeing on liquor and Netflix. This generation is less bound by loyalty to the extended family and tradition. Since it depends so much on the extended family, the meaning Christmas has held for so long is coming apart.

As for me and my house, we will spend the day in my ancestral village, in the lee of the massive stacked granite rocks next to the primary school my great-grandfather donated land for. Most of my uncles and aunts will be there. Their children will run on the grass lawns and scamper up the mango trees, shrieking like supercharged toys.

My father and his agemates will admit me among their company, because I am now a grown up can sit with my elders. We will sit on low chairs nestled among the shrubs. We will take turns praising bottles of whiskey, loudly charging them not to embarrass us with their potency, before downing tots.

My mother and the wives of my uncles will prepare every dish under the sun. One goat, at the very least, and multiple chicken bred for the purpose, will half-willingly give their lives for our enjoyment and nourishment. We will slaughter them behind the house and let some of their blood soak into the soil, because we are in Africa and we can do that and no government can tell us that animals should only be slaughtered in certified abattoirs.

Fellow villages will call in throughout the day. They will get as much of everything as they can take, including words of greeting and wry humour. Some will take a little too much of our whiskey and fall off their chairs.

In the afternoon, lots of gaudily-dressed young people will crowd the local shopping centre, buying stuff and dancing to loud music. To this day, I do not understand how they draw fun from this. But it works for them. The village chief and his men will be around to disperse them if they cause trouble. Some of them, poor souls, will spend the night in a cold police cell somewhere (hopefully, it reminds them of the reason for the occasion).

This has been our routine, with small annual variations, for as long as I can remember. I am tempted to think that some elements of it have lasted since my great-grandfather celebrated the first Christmas of the family. Maybe my grandfather has some memories which I will hear him relate one day.

But I am sure that one thing at least has been carried over unchanged. On Christmas eve (or morning for other members of the family) we will attend Mass, where we will hear the same story he heard those many years ago, the story of a child that was born to a virgin girl, in whose service the missionaries left their homes countless villages away.

And I believe that, even though he would have appreciated the family traditions with which we now mark the day, he would have agreed with me that centre of Christmas is this encounter with our born saviour, for whom he parted with a chunk of his land, even if he never quite got to part with his women.

Mathew Otieno writes from Nairobi, Kenya and his article is printed with permission

“The bullying got so bad that I stopped talking in class.” KATE BRYAN on standing out instead of fitting in