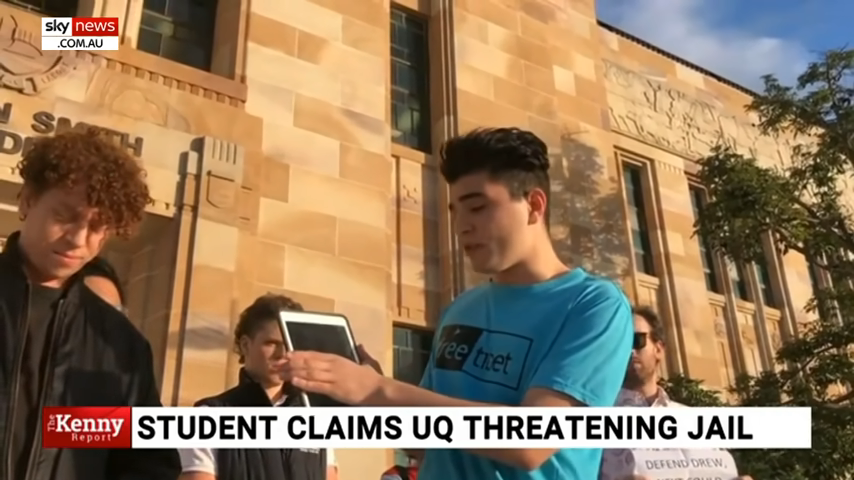 Photo Credit: Drew Pavlou at the University of Queensland

Mark Tarrant grew up in Hong Kong and practices as a lawyer in Sydney. He also represents pro bono (i.e., for free) Drew Pavlou, a student at the University of Queensland who has been expelled for his public criticism of the Chinese Communist Party, in his case against China’s Consul-General in Brisbane. He was interviewed by Massimo Introvigne for the on-line magazine Bitter Winter.

Mr. Tarrant, this is a different case from the one contesting Drew’s expulsion from his university, right?

Yes. On 14 October 2019, Drew Pavlou filed an application for a “Peace & Good Behaviour Order,” a type of restraining order, against PRC Brisbane Consul-General Xu Jie at the Brisbane Magistrates Court, and lodged an organized crime complaint against the Consul-General with the Queensland Police on 30 October 2019. The Hearing is listed for 24 July 2020.

Why these actions by a 20-year-old student against a diplomat representing a powerful country?

On 24 July 2019, a small group of University of Queensland student activists, peacefully advocating on campus for Hong Kong democracy and Uyghur and Tibetan rights, were surrounded, according to Queensland Police estimates, by 500-600 “neo Red Guards” before being viciously attacked, spearheaded by CCP operatives.

The following day, The Global Times carried the PRC’s Brisbane Consul-General Xu Jie’s statement praising the “patriotic” attacks on the pro-democracy students and named two of the student leaders including Drew Pavlou, describing him as an “Australian national” whilst the other student leader’s “nationality has yet to be confirmed.”

What is your view of The Global Times?

Professor Geremie R. Barmé, an expert witness in Drew Pavlou’s case against the Consul-General, describes The Global Times as a “mouthpiece of the official line of the Chinese Communists.” He says that, with its “inflammatory rhetoric and double-think approach to reporting and commenting both on Chinese society and global affairs” The Global Times is “somewhat reminiscent of Der Stürmer, the infamous yet influential German propaganda newspaper published by Julius Streicher from the 1920s until the collapse of the Nazi regime at the end of the Second World War.”

You have proposed a comparison between the CCP regime in China and the Nazi regime in Germany. This seems quite strong. Can you explain?

The People’s Republic of China’s similarity with the Third Reich does not end with Der Stürmer. The PRC’s crimes of today are in-step with the 1946–47 Nuremberg Military Indictments against members of the former Nazi regime.

Telford Taylor, the USA’s Chief of Counsel for War Crimes, in presenting the indictments in Nuremberg explained how the Third Reich’s pre-war commercial and industrial activities “were carefully designed to weaken the United States as an arsenal of democracy” by retarding “the production within the United States of certain strategic products,” including sulfur drugs, precursors to modern antibiotics. Using nefarious business practices almost identical to those of pre-war Nazi Germany, the PRC now controls most of the world’s strategic products, and infiltrates democratic countries via Huawei. One can even believe that the CCP has studied the pre-war strategies of the National Socialist German Workers’ Party and made them its own.

As Telford Taylor explained, “The criminal programs of the SS were so widespread and conducted on such a gigantic scale that they were a matter of common knowledge throughout Germany and throughout the world.” Yet few reacted. The horrors of the Third Reich continue in present day China.

You have insisted on organ harvesting as evidence…

I find the description of the Chinese Communist Party’s killing-for-organs crimes as “organ harvesting” deeply unsettling—the word “harvest” brings up positive images such as harvesting a crop, which benefits the community, the harvest festival, a harvest moon. A harvest helps to maintain human life. The CCP is murdering its own people for money. Why do so many people follow Adolf Hitler’s advice when he said, “What does it matter to us. Look away if it makes you sick”?

According to the independent China Tribunal’s final judgement (London, 1 March 2020) “a schoolteacher… was sentenced to death for her ‘counter-revolutionary’ thoughts. The execution was performed by three officers… Two officers restrained… while the third officer put the gun against her back on the right side and fired the bullet. Years later, one of the officers told the witness… that the order was not to kill… immediately. ‘The kidneys must be harvested before she dies.’ because the army doctors wanted high quality kidneys, ‘kidneys from a living person.’”

In Australia, a patient advised his NSW doctor that he no longer needed to be on the kidney donor waiting list, because a prisoner in China will be shot next Monday—as recounted by David Shoebridge, MP at NSW Parliament House on 4 August 2016 whilst hosting the screening of Hard to Believe, a documentary about the CCP’s killing for organs crimes.

Charles Darwin’s faith in the sanctity of the individual, which is essential to Western civilization, was extinguished when he saw the larvae of the Ichneumonidae parasitic wasp feeding within the body of living caterpillars, leaving Darwin to conclude that “the strongest live and the weakest die.”

Karl Marx took Darwin’s conclusion to heart. Freed of any sense of human compassion and feeding off human misery, the CCP’s 70 years of rule over China has resulted in the deaths of 70 million innocent men, women, and children. Having destroyed the rights of the individual on Mainland China the CCP is post-haste destroying Western civilization from the inside out.

One of the pillars of Western civilization is democracy, which puts into practice the Christian belief that each of us, including the weak and dispossessed, are made in God’s image. This not a belief shared by the CCP. Alexander Bowe, Policy Analyst at the USCC, explains the CCP designates democracy activists as one of the “Five Poisons” that threaten its rule (the other four “poisons” are Uyghurs, Tibetans, Taiwan independence proponents, and the Falun Gong spiritual group).

The Pavlou case became a moment of national soul-searching about Australia’s relations with China. In general, what is Australia’s reaction to news about human rights abuses in China?

Just as the crimes of the Third Reich failed to make everyone sick, the CCP’s crimes and accelerating human rights abuses do not sicken all. Hedley Thomas in The Australian described Hong Kong pro-democracy activists as “masked terrorists.”

“In general, there’s little appetite for democracy in China,” writes Cindy Yu in The Spectator—the article was also published in The Spectator Australia. She ignores the Republic of China, i.e. Taiwan, where Chinese people for the first time in their history are enjoying democracy. These writers and their editors are the CCP’s willing and enthusiastic “co-propagandists” in the West. One can only speculate about their motivations.

Why is the Pavlou case so important?

With its hate-fueled ideology, the CCP is attempting to excise from Australian campuses the rule of law. There are but a handful of Australians not intimidated by this murderous regime – one is Drew Pavlou, willing to defend our sacred rights.

Let me quote again from Prof. Barmé. “Australia is regarded as being a test case by Beijing, he explains, one in which its international behavior is used to measure how far increasingly aggressive state policy can advance in the ‘Western world’. That PRC students and other actors are taking the lead from the inflammatory rhetoric of Official China and propaganda-news outlets like The Global Times to intimidate and threaten violence against Australian citizens and other students in Australia should rightly cause alarm. If the Australian government and authorities fail to express deep concern about or openly oppose such developments, then our independent legal institutions and free media certainly should.”

Republished with permission from Bitter Winter

Massimo Introvigne is an Italian sociologist of religions. He is the founder and managing director of the Center for Studies on New Religions (CESNUR), an international network of scholars who study new
Mark Tarrant is a lawyer who represents Drew Pavlou, a student expelled from University of Queensland, in his lawsuit against the Chinese Consul-General in Brisbane.