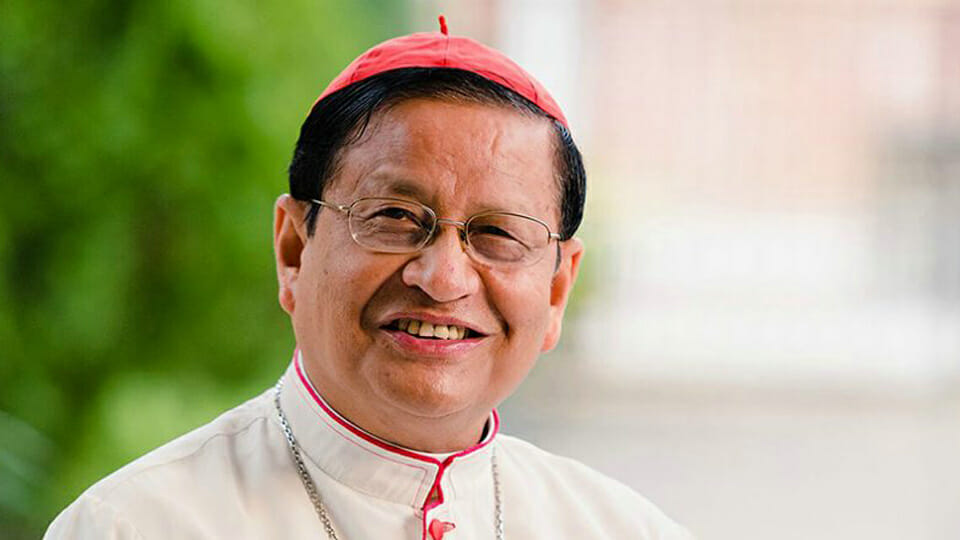 A Burmese Cardinal has called on the Chinese Communist Party to apologise and pay compensation, especially to poorer countries, for causing the coronavirus pandemic “through its criminal negligence and repression”.

Cardinal Charles Maung Bo, Archbishop of Yangon in Myanmar and president of the Federation of Asian Bishops’ Conferences, said “international voices are being raised against the negligent attitude shown by China, especially its despotic Chinese Communist Party (CCP) led by its strongman Xi Jinping.”

He described the Chinese Communist regime as a “threat to the world” and called on leaders to be unafraid to hold the CCP to account. “As a minimum, it should write off the debts of other countries to cover the cost of Covid-19,” the Cardinal wrote.

“[T]here is one government that has primary responsibility for what it has done and what it has failed to do, and that is the CCP regime in Beijing,” he said.

In a hard-hitting article in UCA News, Cardinal Bo said that it was now becoming clear that China had “hidden the true scale of coronavirus”.

“An epidemiological model at the UK’s University of Southampton found that had China acted responsibly just one, two or three weeks earlier, the number affected by the virus would have been cut by 66 percent, 86 percent and 95 percent respectively. Its failure has unleashed a global contagion killing thousands,” he claimed.

And the senior Catholic clergyman spelled out that he was finding fault with the Communist party, not the Chinese people.

“Let me be clear — it is the CCP that has been responsible, not the people of China, and no one should respond to this crisis with racial hatred toward the Chinese. Indeed, the Chinese people were the first victims of this virus and have long been the primary victims of their repressive regime. They deserve our sympathy, our solidarity and our support. But it is the repression, the lies and the corruption of the CCP that are responsible,” he wrote.

The Cardinal laid out a series of actions he said the Chinese government had undertaken to suppress the truth: “When the virus first emerged, the authorities in China suppressed the news. Instead of protecting the public and supporting doctors, the CCP silenced the whistleblowers. Worse than that, doctors who tried to raise the alarm — such as Dr. Li Wenliang in Wuhan Central Hospital who issued a warning to fellow medics Dec. 30 — were ordered by police to “stop making false comments.” Dr. Li, a 34-year-old ophthalmologist, was told he would be investigated for “spreading rumors” and was forced by police to sign a confession. He later died after contracting coronavirus,” he wrote.

“Young citizen journalists who tried to report on the virus then disappeared. Li Zehua, Chen Qiushi and Fang Bin are among those believed to have been arrested simply for telling the truth. Legal scholar Xu Zhiyong has also been detained after publishing an open letter criticizing the Chinese regime’s response.”

“Once the truth became known, the CCP rejected initial offers of help. The US Center for Disease Control and Prevention was ignored by Beijing for over a month, and even the World Health Organization, although it collaborates closely with the Chinese regime, was initially sidelined,” he said.

]He also claimed that “the Chinese regime’s official statistics significantly downplay[ed] the scale of infection within China. At the same time, the CCP has now accused the United States Army of causing the pandemic. Lies and propaganda have put millions of lives around the world in danger.”

“The CCP’s conduct is symptomatic of its increasingly repressive nature. In recent years, we have seen an intense crackdown on freedom of expression in China. Lawyers, bloggers, dissidents and civil society activists have been rounded up and have disappeared.”

Cardinal Bo said the CCP had also “launched a campaign against religion, resulting in the destruction of thousands of churches and crosses and the incarceration of at least one million Uyghur Muslims in concentration camps. An independent tribunal in London, chaired by Sir Geoffrey Nice QC, who prosecuted Slobodan Milosevic, accuses the CCP of forced organ harvesting from prisoners of conscience. And Hong Kong, once one of Asia’s most open cities, has seen its freedoms, human rights and the rule of law dramatically eroded.”

“A threat to the world”

“Through its inhumane and irresponsible handling of the coronavirus, the CCP has proven what many previously thought: that it is a threat to the world” the Cardinal wrote.

“China as a country is a great and ancient civilization that has contributed so much to the world throughout history, but this regime is responsible, through its criminal negligence and repression, for the pandemic sweeping through our streets today,” he said.

He called for an apology – and compensation.

“The Chinese regime led by the all-powerful Xi Jinping and the CCP — not its people — owes us all an apology and compensation for the destruction it has caused. As a minimum, it should write off the debts of other countries to cover the cost of Covid-19.”

“For the sake of our common humanity, we must not be afraid to hold this regime to account. Christians believe, in the words of Paul the Apostle, that we must “rejoice with the truth,” for as Jesus says “the truth will set you free.” Truth and freedom are the twin pillars on which all our nations must build surer and stronger foundations,” said the Cardinal.

“In my own country, Myanmar, we are extremely vulnerable. Bordering China, where Covid-19 first began, we are a poor nation without the health and social care resources that more developed nations have. Hundreds of thousands of people in Myanmar are displaced by conflict, living in camps in the country or on our borders without adequate sanitation, medicines or care. In such overcrowded camps the social distancing measures implemented by many countries are impossible to apply. The healthcare systems in the most advanced countries in the world are overwhelmed, so imagine the dangers in a poor and conflict-ridden country like Myanmar.”

The upcoming US census