A man for all seasons: Review of Thomas Sowell, Common sense in a Senseless World 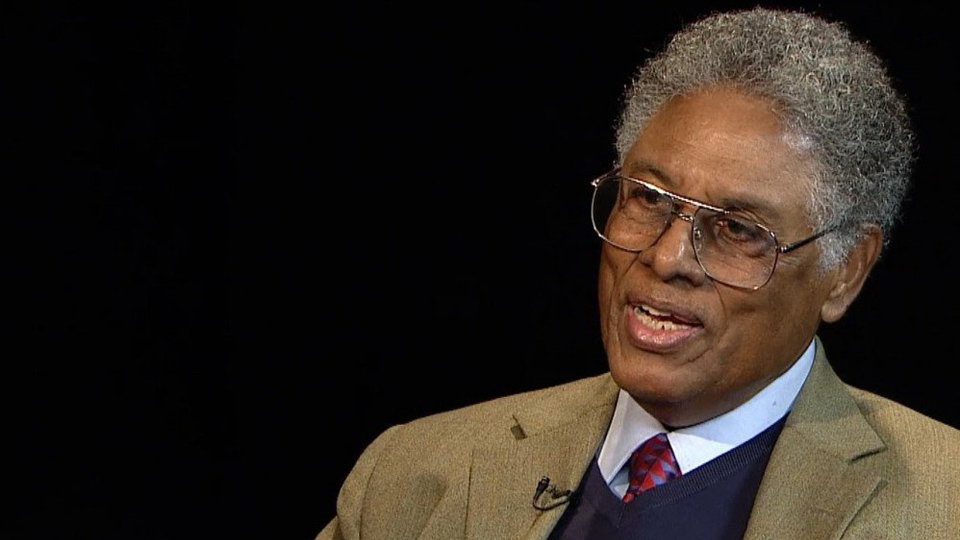 There is a twitter account named Thomas Sowell Quotes, and its popular because a quote from Thomas Sowell could easily give you a brilliant insight, daily, from now until your passing. Sowell is one of the most prolific intellectuals of the past century and his books and articles are a trove of riches and deep insights into economics, humanity, and surprisingly enough, late-talking children, where he made breakthroughs and insights in a field completely outside his expertise.

Author Jason Riley’s just released documentary (which is available on youtube) on Thomas Sowell, is an enjoyable introduction to one of the most respected conservative thinkers on the planet. The scene he selected to open it with lets you know, if you never heard of Sowell before, that he is battler for truth who will never timidly defer to popular ideas if those ideas are refuted by hard facts.

We open this journey in a television studio just over 40 years ago. Sowell is agitated, leaning up on his elbows on his studio chair and he is eviscerating his opponent with what must have been the most surprising knock down she had ever heard.

“This whole notion that the black family has always been disintegrating, that is nonsense,” said Sowell

“The great bulk of black families were intact two-parent families up through 1925, and going all the way back through the era of slavery. So it is now, only in our own time, that we suddenly see this inevitable tragedy which the welfare system says it’s going to rush in to solve.”

Thomas Sowell, directed by a love of facts, has swam against the liberal current for over six decades, and he has never been afraid to follow the facts, and let dishonest intellectuals know when they are talking baloney.

Riley introduces his subject saying: “For me Thomas Sowell is that rarest of species; an honest intellectual. He spent a career putting truth above popularity. He’s explored the answers to questions others were afraid to even ask. He’s followed the facts where they lead and accepted the findings however unpopular or politically incorrect”

His documentary opens with the studio scene described above and Sowell demolishing the arguments of a white liberal. Sowell seemed exasperated with the lazy and smug liberal canard that black family breakdown was the legacy of slavery. He rebutted the notion, and his opponent, with a summary of history and the reality of the black family that left no room for doubt.

Unfortunately, as Sowell’s experience has shown him over the decades, liberals are so in love with their theories – and an entrenched view that they have the only ‘caring’ vision – that facts and evidence don’t count in their discourse. Quoting Sowell: “these people are immune to facts.”

Riley takes us on a journey through Sowell’s life and his intellectual work. What he demonstrates most ably is that Sowell’s ideas and his perspective were shaped by his experience in the world. Sowell’s life taught him that economic and political theories are not abstract beautiful things without consequence. He figured out early on that if the policies don’t get the results you predicted, your theory was wrong to begin with.

Sowell has an empiricist view of the world that acknowledges that people respond to incentives, and that policies can be tested and their effects measured. Resources, he says, are limited, and there is no perfect decision, just a trade off between one choice and another. This is the central pillar of the Sowellian world view.

There is a wonderfully succinct dialogue in the documentary where Sowell was being interviewed by Dave Rubin of the Rubin Report.

Rubin asked Sowell, “You were a Marxist at one time in your life, what was your wake up to what was wrong with that line of thinking?”

Most factual arguments that conservatives find themselves rebutting “progressive” canards with were uttered by Thomas Sowell forty or fifty years ago. But Sowell used more than common sense to make these arguments, he has relied on deep research using extensively gathered hard fact, to derive his theories. He has relied on testing of these theories to draw his conclusions. Anything Sowell has factually stated has been tested and proven by him.

That’s the philosophy of Thomas Sowell. What Jason Riley does is reveal to us the person and the journey that turned a poor and disadvantaged young southern black orphan from a Marxist into a realist.

Sowell moved from North Carolina to Harlem, NY, at the tail end of the Great Depression, a few years after his mother died. His father had died before he was born, and after the death of his mother when he was three he was raised by his three aunts. In the South he had no hot running water or electricity, and in Harlem he was poorer than most, but Harlem had what he needed to get ahead. At the age of 8, young Tommy was introduced to the Harlem public library and books. That was the start of one of the most extraordinary intellectual journeys on the past century.

Sowell had plenty of challenges to overcome in his life and one of the first things this curious and smart young man wanted an answer to was, why there was such a big difference in the lives of ‘those who had and those who had not’. Taking the bus home from his first Western Union job, young Thomas noted the difference between 5th Avenue and the slums on 135th St. It was clearly observable, but inexplicable, and the only voice that seemed to explain it to Sowell was one Karl Marx.

The funny thing is that Sowell had to meet a few Marxists to realise how false that vision was. A bit like George Orwell, his encounter with real socialists made him realise that these were mostly crooks motivated by envy and their own advancement, who pushed failing policies mainly to keep themselves in jobs.

Sowell jokes that even the Chicago School of Economics, where he studied under Milton Friedman, couldn’t shake his Marxist commitment, but one summer in the federal government did.  Here he met people who avoided facts like the plague, if it might interfere with their vision of how the world should work.

He tells a story of how he approached his bosses in the Federal Department of Labour with a method of testing whether minimum wages did good overall, or whether it meant more unemployment and a lower average income. When he proposed a method to test his theories using data that had been gathered by the Department of Agriculture, he says he could see “they were stunned, and they were saying ‘this idiot has stumbled on something that will ruin us all’.”

This was a revelation that made him realise that the Department had their own interest and it didn’t necessarily have anything to do with their claimed purpose of supporting the labouring man.

Sowell’s immense body of work makes the case that politics is the worst way for a group to advance their own upward mobility. The many books he has written on race, culture, politics, migration, racial inequality, and economics make a clear point that human capital is the biggest asset of any culture, and that that capital is achieved through culture, not politics.

From Sowell’s insights, and from the statements of others who know him and his work, we are shown that Sowell deals with the world as it is, not as he might like it. He tries to understand it through real-world testing and a deep analysis of the facts, because to make anything better you have to understand the facts first.

Perhaps the most surprising revelation in this documentary was Sowell’s love of photography. He was drafted in 1951 and joined the Marine’s camera corps where he documented the US army in combat.  It turned out Sowell was a real master of the art, and he is respected worldwide for his photography. Maybe it’s not surprising that it played to his personal strengths. Sowell has an observant eye and a natural technical ability.

Explaining how he takes a picture he said:

“To be a photographer, you have to master trade-offs. All of the little adjustments you fiddle with in a camera never involve making everything better or everything worse. It’s a matter of trading one thing off against another. If you close down the diaphragm you get lots of stuff in focus near to far. On the other hand you are cutting down the amount of light.”

Life involves trade-offs. Whether it is capturing an image on camera or judging the effect of public policies, there is no perfect solution, just trade-offs. This is a theme in nearly all Sowell’s work on society.

Sowell has a philosopher’s gift for seeing to the truth of the matter and simplifying complex and hard grasped theories in plain transparent language. For instance, he expresses his opposition to left-wing policies and theorising in a way that acknowledges the spell that vision has.

In one clip we find him saying: “The vision that the left has – and I think many conservatives underestimate this – is a really more attractive vision.”

But the next sentence puts that all in context: “The only reason for not believing in it, is that it doesn’t work.”

At the age of 90, Thomas Sowell recently stated that his latest book was the most important scholarship he had ever published. Sowell, an Economist, Philosopher, Political Scientist, and highly regarded photographer, is possibly the greatest living scholar on earth, but his latest book, in defence of parental choice in schooling, might well be the thing that tackles all of the ills that his life’s work highlight

We all have to die. Why have we forgotten how to die well?