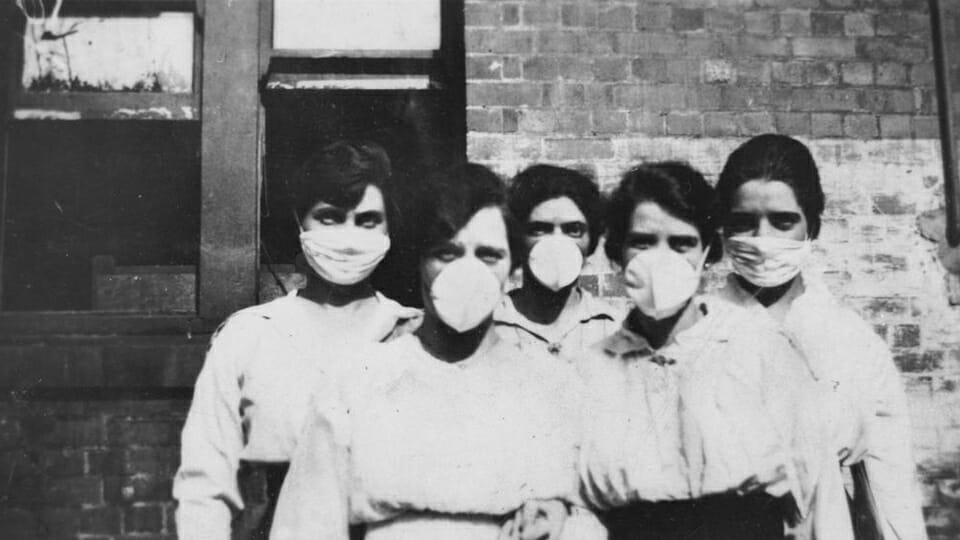 Five women are standing in front of a brick building, possibly a hospital, wearing surgical masks during the Spanish Flu outbreak in Brisbane, 1919

The deadly flu pandemic in 1918 is estimated to have taken 50 million lives – more than were lost in World War I, and National Geographic says it is believed to have originated in China.

This 2014 article on the origins of the so-called Spanish Flu of 1918   is now going viral  again as the coronavirus puts the world on lockdown.

The National Geographic says that for decades scientists have been unsure where the Spanish Flu started, which left them with an incomplete understanding for future  outbreaks.

“Historian Mark Humphries of Canada’s Memorial University of Newfoundland says that newly unearthed records confirm that one of the side stories of the war—the mobilization of 96,000 Chinese laborers to work behind the British and French lines on World War I’s Western Front—may have been the source of the pandemic,” they reported.

“This is about as close to a smoking gun as a historian is going to get,” says historian James Higgins, who lectures at Lehigh University in Bethlehem, Pennsylvania, and who has researched the 1918 spread of the pandemic in the United States. “These records answer a lot of questions about the pandemic.”

“The 1918 flu was the last of the great plagues that struck humanity, and it followed in the tracks of a global conflict,” Humphries wrote at the time.

He noted that historian Christopher Langford had previously shown that China had suffered a lower mortality rate in the 1918 pandemic than other nations  – leading some to believe that an immunity was at large in the Chinese population because of this earlier exposure to the flu.

According to the National Geographic: “In the new report, Humphries finds archival evidence that a respiratory illness that struck northern China in November 1917 was identified a year later by Chinese health officials as identical to the Spanish flu.

He also found medical records indicating that more than 3,000 of the 25,000 Chinese Labor Corps workers who were transported across Canada en route to Europe starting in 1917 ended up in medical quarantine, many with flu-like symptoms.”

The Spanish flu was thus named mostly because wartime restrictions meant most countries minimised reporting on the devastating effects, but that did not happen in neutral  Spain.

The movement of troops and conditions in trenches in the first World War was originally blamed for the pandemic’s spread, especially as the Flu inexplicably struck down healthy young people but the spread of the virus outside of these channels saw scientists and historians seeking other answers.

As the National Geographic says:

But in his study, Humphries reports that an outbreak of respiratory infections, which at the time were dubbed an endemic “winter sickness” by local health officials, were causing dozens of deaths a day in villages along China’s Great Wall. The illness spread 300 miles (500 kilometers) in six weeks’ time in late 1917.

At first thought to be pneumonic plague, the disease killed at a far lower rate than is typical for that disease.

Humphries discovered that a British legation official in China wrote that the disease was actually influenza, in a 1918 report. Humphries made the findings in searches of Canadian and British historical archives that contain the wartime records of the Chinese Labor Corps and the British legation in Beijing.

At the time of the outbreak, British and French officials were forming the Chinese Labor Corps, which eventually shipped some 94,000 laborers from northern China to southern England and France during the war.

“The idea was to free up soldiers to head to the front at a time when they were desperate for manpower,” Humphries says.

Shipping the laborers around Africa was too time-consuming and tied up too much shipping, so British officials turned to shipping the laborers to Vancouver on the Canadian West Coast and sending them by train to Halifax on the East Coast, from which they could be sent to Europe.

So desperate was the need for labor that on March 2, 1918, a ship loaded with 1,899 Chinese Labor Corps men left the Chinese port of Wehaiwei for Vancouver despite “plague” stopping the recruiting for workers there.

In reaction to anti-Chinese feelings rife in western Canada at the time, the trains that carried the workers from Vancouver were sealed, Humphries says. Special Railway Service Guards watched the laborers, who were kept in camps surrounded by barbed wire. Newspapers were banned from reporting on their movement.

Roughly 3,000 of the workers ended up in medical quarantine, their illnesses often blamed on their “lazy” natures by Canadian doctors, Humphries said: “They had very stereotypical, racist views of the Chinese.”

Doctors treated sore throats with castor oil and sent the Chinese back to their camps.

The Chinese laborers arrived in southern England by January 1918 and were sent to France, where the Chinese Hospital at Noyelles-sur-Mer recorded hundreds of their deaths from respiratory illness.

Historians have suggested that the Spanish influenza mutated and became most deadly in spring 1918, spreading from Europe to ports as far apart as Boston and Freetown, Sierra Leone.

By the height of the global pandemic that autumn, however, no more such cases were reported among the Chinese laborers in Europe.

Humphries concedes that a final answer to the mystery of the Spanish flu’s origins is still a ways off.

“What we really need is a sample of the virus preserved in a burial for the medical experts to uncover,” Humphries says. “That would have the best chances of settling the debate.”