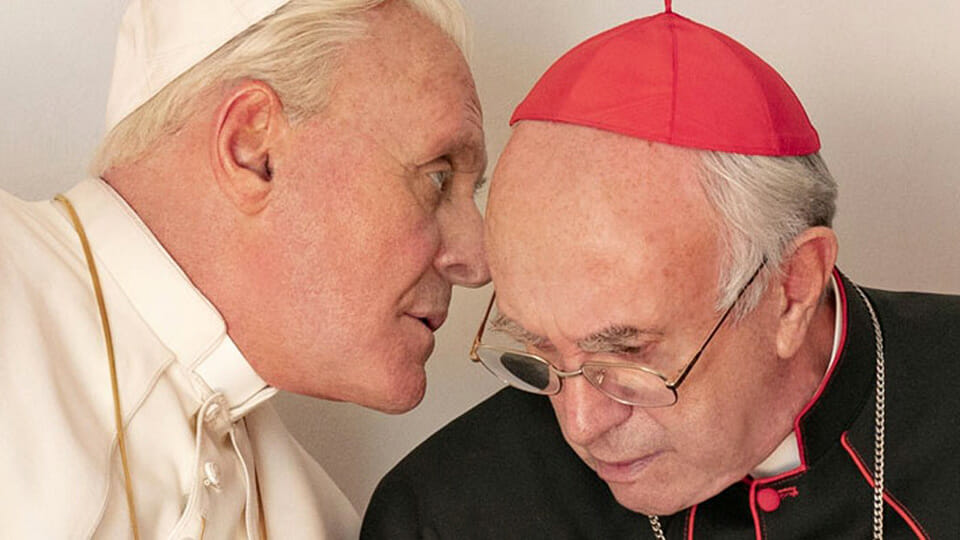 The release of Netflix’s The Two Popes has achieved something truly remarkable by drawing public attention not just to Pope Francis, but to his predecessor Pope Benedict XVI as well.

The basic idea and plot is a very clever one.

Towards the end of Pope Benedict’s papacy, the Archbishop of Buenos Aires Jorge Bergoglio is summoned to the Vatican to discuss his intention to resign.

Benedict is physically ailing and the Church is under immense pressure, not least due to the sexual abuse crisis.

When Bergoglio arrives at the Pope’s summer retreat, he is confronted in the garden by Benedict.

Oddly, the director Fernando Meirelles suggests that some animosity has existed between the two men for a long time, even before the 2005 papal conclave in which Bergoglio finished as runner-up.

An argument quickly ensues in the garden, one which will be renewed (though in friendly terms) throughout the two hour film.

Their disagreements are presented in simple form.

Pope Benedict is an arch-conservative and obsessed with upholding Church teaching; Cardinal Bergoglio is the progressive moderniser.

Bergoglio dresses as simply as he can, and is depicted living and preaching amongst Argentina’s poorest people.

In contrast – and hardly a moment goes by in the movie when that contrast is not exaggerated to the greatest possible degree – Benedict is detached, living in relative opulence and near solitude behind his Church’s high walls.

“You have been one of my harshest critics,” Benedict scolds him as they sit together in the garden. “The way you live is a criticism.”

The dialogue between the two evolves as a rapport grows, and it gradually becomes clear to Cardinal Bergoglio that this visit to Rome is no mere formality: he has been summoned for a reason, one which only becomes clear as we begin to see a side of Benedict’s mind which extends beyond the upholding of tradition.

The Two Popes is receiving very good reviews, which has surprised some secular observers.

There is much to admire in it.

The writer, Anthony McCarten, is a terrific story-teller who has written some of the most enjoyable movies in recent years: The Theory of Everything (about the life of Stephen Hawking), Darkest Ho(about Churchill’s decision to continue the fight against Hitler in 1940) and last year’s wonderful Bohemian Rhapsody.

It is beautifully shot too: particularly the engrossing scene where the two clerics converse against the backdrop of the Sistine Chapel.

It is a story based around a dialogue between two key characters, and so the director has a great deal of room to allow the two magnificent Welsh stage actors Anthony Hopkins (Benedict) and Jonathan Pryce (Francis) to work their magic.

That they do, for two wonderful hours, and it is worth seeing The Two Popes to witness their performances alone.

Fictional or not – and this story and dialogue is most definitely fictional – there is something here which is deeply compelling.

The loneliness of the papacy must be hard to comprehend. There has not been a time for almost a millennium where one Pope could meet with another.

Pope Benedict and Pope Francis meet here on a near-equal footing, and the film is at its best in those tender moments when the two very different characters turn to one another while struggling with the sins of the past: in what they have done, and in what they have failed to do.

But there is a great deal that is wrong with this film, which presents an erroneous vision of the Catholic Church, not the mention the two men who have most recently taken on the awesome responsibility of leading it.

In particular, there is a clear agenda to damage the reputation of the already much-maligned Pope Emeritus.

From the initial conversation onwards, the theological or philosophical differences between Benedict and Francis are greatly exaggerated, with the emphasis always being placed on the reasonableness of Cardinal Bergoglio’s supposed viewpoints, and how they contrast with the stubborn dogmatism of the pontiff he will eventually replace.

Pope Benedict, his future successor as much as says to his face, is too obsessed with issues like compulsory celibacy, sexual morality or the Latin Mass.

Cardinal Bergoglio is altogether more worldly. When asked by Pope Benedict what he would have done had he prevailed in the 2005 conclave, Bergoglio does not mention God or Catholicism.

Instead, the Archbishop of Buenos Aires says his first priority would be reforming the Vatican Bank, and then doing something about global banking system more generally.

Towards the end, the film is peppered with scenes where Francis calls for greater solidarity with the poor, or where he engages in charitable deeds.

This, it is implied, represents a new and more positive face of the Catholic Church, unlike Benedict who apparently never left the papal apartments except to condemn some vice or wade into some culture war.

The director and the writer appear to be fervent believers in the dominant narrative about the Church being embroiled in a culture war between conservatives and liberals, disciples of Benedict and disciples of Francis.

But the Vatican is not a state riven by political divisions, and a papal conclave does not resemble an American presidential primary.

Pope Francis and Pope Benedict have both dedicated their long lives to the same 2,000 year-old Church. They follow the example of the same Saviour, they pray to the same God, they uphold the same Magisterium, they preach the same Gospel.

There is no great division in worldview, only relatively minor ones, the sort of minor disagreements which always exist between families or friends.

The obvious warmth between the Pope and the Pope Emeritus (which can be observed in their public meetings) is proof of this, and when accepted, the premise of The Two Popes quickly begins to fall asunder.

More importantly, the real-life records of the two men show that neither portrayal is fair or accurate.

Would the director Meirelles or the writer McCarten be aware that Pope Benedict issued a papal encyclical, Caritas in veritate, calling for a reformed United Nations with increased powers to regulate the world’s financial systems, or that he presided over the efforts to make the Vatican the world’s first carbon-neutral state?

Alternatively, would they know that Pope Francis has compared abortion to contract killing, denounced gender ideology repeatedly and slammed the “ideological colonization” which would enforce liberal social policies on developing countries?

Hardly: sometimes myths are easier to believe in.

In this film, the image presented of Francis is that of a man who has changed with time – in part due to the experiences of living under the right-wing junta in Argentina – and who now stands ready to dramatically change Church teaching as well.

Disappointingly for those of that school of thought, almost seven years after his election, Pope Francis remains Catholic.

And the smart money is betting that the next Pope will be Catholic too.

The greatest flaw in The Two Popes is not to do with Francis however, but with Benedict, and how he is portrayed.

Given how many in the Western media and cultural elite depicted Joseph Ratzinger for so long, the fact that he is not made out to be an outright monster might be considered a success.

In fact, several reviewers – such as Hilary White in The Irish Independent, and Donald Clarke in The Irish Times – have suggested that Benedict gets off lightly here, thanks to the filmmakers’ decision to portray him as human.

That being said, there is much less complexity in the portrait of the Pope Emeritus, and it is to the eternal credit of Anthony Hopkins that he manages to draw so much out of playing a role which is deliberately one-dimensional.

The viewer is treated to a very powerful series of flashbacks about the young Bergoglio showing how the young man had a bright future with his scientific work and girlfriend before he decided to enter the seminary, and showing the great struggles he faced in defending his friends when Argentina was in the grip of tyrants.

He is haunted by his failings, and confesses them to Benedict in the Sistine Chapel before receiving absolution from him.

Touching, and well and good. But Joseph Ratzinger also had a past, one that is completely ignored by the director.

It is as if Benedict came into the world as an ancient and curmudgeonly German.

A more nuanced and more interesting film would have given the viewer a glimpse of a young Bavarian boy who was precociously gifted, and whose family and Church endured persecution by a government far worse than that which governed Argentina in the 1970s.

After his country had been reduced to rubble, the same boy would dedicate his life to God and scholarship. He would become an influential academic and distinguished theologian, and he would foresee generations in advance the challenges which Europe would face as Christianity fades away in its historical heartland.

Sadly, The Two Popes fails to shine much light on either man, preferring to present viewers with a striking contrast between two walking caricatures.

With the right script and direction, this could have been a masterpiece.

But for all its failings, it is enjoyable: a good story about two very good men.

Film Review: The Conservatism of The Lion King