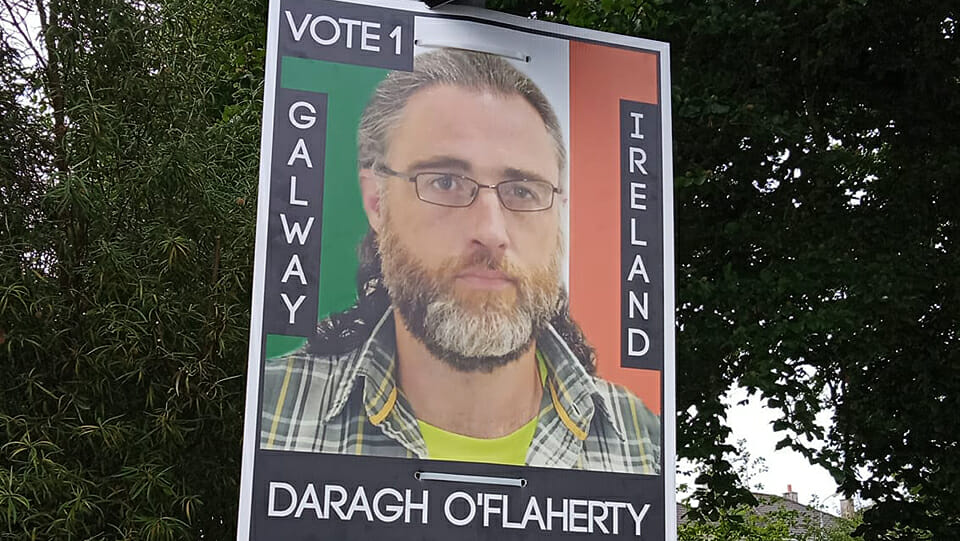 In every election, there are a few types of candidate. The sitting TD. The young councillor springing a challenge. The independent standing because politicians have failed on some local issue, like a hospital or a road. And then you have the candidates nobody really hears about, because they lack the budget or the teams of the others. We might whisper about them in the pub – “who’s yer man?” – but they rarely feature heavily in the final count.

One of those candidates, hoping to buck the trend in this election, is a homeless man from Galway who’s standing for election on a hard-line anti-immigration platform.

As a self described “patriot”, Daragh O’Flaherty is an outlier in more ways than one. If being the only homeless candidate standing in the general election doesn’t give him a unique selling point, then some of his views are likely to make voters look twice at a man who seems to want to rock the boat in every way he can.

The Galway man came to prominence in Ireland’s online community late last year when he posted an audio recording of what he alleged to be a People Before Profit candidate, Joe Loughnane, a constituency rival of O’Flaherty’s, claiming to have “sorted out” people in Galway with cocaine, a revelation later confirmed by the accused.

Although the move didn’t endear Mr. O’Flaherty to some, it certainly set the tone for his abrasive election campaign, where his lead message to the people of Galway is “Pull the Pin”.

Whilst the issues he cares about range from mainstream issues like homelessness and suicide to much more controversial views he holds on “Islamification and mass migration”, the 43-year-old retains the same calm, controlled demeanour regardless of the topic under discussion.

His focus on immigration has led to testy exchanges with members of the public, with one man recently berating him outside a shopping centre and accusing him of racism, a charge O’Flaherty dismisses as “irrational” given the diversity of friends he says he has in the city.

The Independent candidate knows the city well, having grown up and lived in Galway throughout his life, which makes his unfazed attitude to any local hostilities all the more unusual – an Irish man or woman who genuinely seems not to care what’s said about him is a rarity indeed.

Homelessness is not something he ever expected to experience, but after a fire destroyed his home and livelihood as a mechanic in the adjacent garage, O’Flaherty says he has been confined to” hostels and couch-surfing” for the past five years, not seeing any way out because of the housing crisis.

Ironically, he shares that homelessness has given him the time to turn to politics, something he wouldn’t have done if he was still in business. He feels that he has made the best of a bad situation, saying his “minimalist lifestyle” has allowed him to lead a more calm existence than before, that the people in his current hostel are warm, and that a good community spirit prevails within its walls.

“There’s no political will to end homelessness”, O’Flaherty claims, “when people are stepping over homeless people on the streets, they’re far more likely to pay higher rents for sub-standard accommodation”, a financial reality that he claims, along with a dearth in supply, is squeezing poorer people out.

He also says being homeless has shaped his views on immigration, claiming that it is “almost a uniquely Irish problem”, in the sense that he says he has met vanishingly few immigrants living on the streets of Ireland, with the exception of Romani people who, he claims, get “picked up in a van after 3 o’clock in the morning” when the drinkers go home.

“Why is it the case that it’s only white Irish lying in the door?” he asks. I get the sense it’s not as black and white as he maintains however, having seen the funeral of a Polish man who froze to death on Dublin’s streets.

Nonetheless, the Galway native says he has only ever met one African, one Caribbean person, and some Romani among a host of Irish stuck in the homeless system.

There’s no sense of animus in his voice, to be fair to him, as he describes the few homeless foreigners he has met, and his concerns do clearly extend well beyond immigration to other issues such as the staggeringly high number of suicides in Galway, but you get the feeling that immigration, above all, is the issue that animates his political activism.

O’Flaherty’s stance on these issues remains a view confined to the fringes in Ireland, but in countries like England and France views similar to those he expresses have grown in popularity in recent years, much to the consternation of many liberals. O’Flaherty says it is only a matter of time before the same thing happens in Ireland, and that Irish people have only begun asking questions about whether our services and housing supply are being strained by our immigration policies.

When challenged about his claims that Ireland is under threat of “Islamification”, O’Flaherty doubles down, insisting that one mosque in particular is linked to the Muslim Brotherhood, and that as “a foreign, competing and dominant ideology”, Islam will inevitably influence our legal system and politics.

Many, of course, would argue that this is an unfair depiction of the intentions of most Muslim immigrants. Nor is there any way to verify his claims about the mosque in question.

A passion becomes apparent in his voice when he is challenged about the many Irish who left for foreign lands, “some in coffin ships”, whom he says tried to assimilate into and contribute towards their host nations, but he is not for turning on whether we therefore owe immigrants to our land a similar chance.

“For a start off, we have to open the (immigration) debate…some people come here to exploit our population and our good will by selling drugs or getting involved in the sex trade, so there is no acknowledgement from any of the political parties or any of the independents that, in fact, our immigration system is allowing criminals to come into our country and exploit our population…I have to bring that to the table,” he says.

His preferred level of immigration, he says, is 5% of the Irish population, and anything more he claims “would be detrimental to the host population”. A conversation is needed on what limits Ireland might choose, he says, before the situation becomes what he calls “irredeemable.”

Although many are fond of his hometown, O’Flaherty believes traffic and pedestrian congestion throughout the city are taking away from the quality of life Galway people once enjoyed, with “a lick of paint” needed for its year as Europe’s capital of culture. Tourism will continue to be a double-edged sword for the town he says, benefiting business, but also making it harder for locals to connect.

Whether a political tremor of sorts hits his constituency of Galway West in the coming days remains to be seen, with two Independent TDs, Noel Grealish and Catherine Connolly, both behind challengers from the Social Democrats and the Green Party in the latest poll.

The same poll indicates that Daragh O’Flahtery is very unlikely to register any significant support, but the homeless Galway native appears to be in this for the long haul.