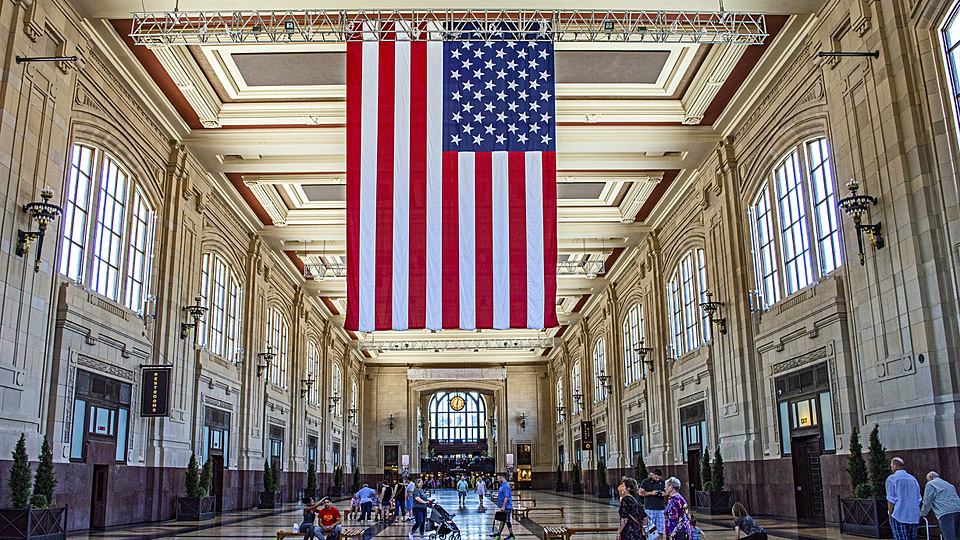 Jason O’Mahony is probably the most interesting newspaper columnist in the land.

His latest article in Friday’s edition of The Irish Independent came about after he watched last week’s Republican National Convention.

Unlike many other figures in the Irish media, O’Mahony clearly admires the United States, which sets his analysis of these matters apart from the rest.

Observing the presidential election campaign, he wonders about the future of a country which is now so badly divided that half the population looks at every potential election defeat as a prelude to the destruction of all they hold dear.

To guard against this scenario, he used his column to suggest that the United States should look to the European Union as a model of a looser political union, one which would allow conservative Red states and liberal Blue states more autonomy.

This would take the pressure out of national elections. The general direction of an individual state – whether that be Massachusetts or Mississippi – would no longer be determined by who prevailed in a winner-takes-all presidential election.

States would be more powerful and federal decision-making would take place in a similar way to how it does in the European Union, where a highly deliberative negotiating process between different national governments hinders speedy decision-making while ensuring that each country can still chart its own course in domestic matters.

This is an attractive solution to a real problem. After all, for all its flaws, the European Union contains within its borders countries and governments as diverse as Merkel’s Germany, Orban’s Hungary, Macron’s France and Kaczyński’s Poland.

Whatever the Union’s flaws, there is no real risk of it falling apart, relations between the states are generally good and big projects like the €750 billion Covid recovery plan are still successfully undertaken.

In previous decades, European federalists dreamed of copying the American model as they giddily promoted “ever closer union.” What has happened in the US to make a reverse process seem worthy of consideration?

There is no question that today’s America is painfully divided.

America’s Congress and Senate used to be forums for bipartisanship in a way that they no longer are. Basic legislative tasks such as agreeing annual budgets now prove torturous. Supreme Court nominees used to be confirmed within days: in recent decades, nominations have often resulted in cataclysmic battles.

This goes far beyond the political class. Over the last half-century, Americans have evolved to become overwhelmingly supportive of interracial marriage, but a growing number of them say they would not want their son or daughter to marry someone who votes for the wrong party.

Blaming Fox News for this extreme partisanship is common, but MSNBC and CNN perform the same role for progressives looking to have their views reinforced. Recent goings-on at The New York Times suggest that this destructive trend will continue in the coming years.

The broader issue driving this fragmentation is the breakdown in the country’s social and moral consensus.

With the delayed arrival of European-style secularism, America is becoming far less Christian – and the militant and unforgiving Woke religion does not fulfil the same role in bringing people together in constructive ways.

As Robert Putnam and others have documents, community has declined sharply in recent decades with churches, civic organisations and trade unions all haemorrhaging members.

The institution of the family is in tatters in many communities, particularly in the inner-cities where the worst rioting is occuring.

People now seek meaning in politics and in defeating the Other, particularly in presidential elections.

This is not what politics is for and a Biden victory in November will not save a dysfunctional system and society. If something does not change, there may come a point where the country’s citizens decide that they cannot go on together.

Given the circumstances, O’Mahony is right to recommend a new political system, but in truth a devolution of powers to the states would not be a new step at all.

The US Constitution established that great nation as a federal republic which strictly limited what the national government could and could not do.

The Tenth Amendment within the Bill of Rights states that “[t]he powers not delegated to the United States by the Constitution, nor prohibited by it to the States, are reserved to the States respectively, or to the people.”

While operating within this federal system, America grew to become the world’s greatest economic power – and the force for greatest good in the world.

But in the 20th century – first under Woodrow Wilson, then under FDR and then under LBJ – American leftists pushed for an unprecedented expansion in the size of the federal government, and the transfer of as much power as possible from the states to the political centre in Washington DC.

This has not created a more perfect union – quite the opposite in fact. Big Government has not delivered the utopia its advocates predicted, and more seriously, it is now imperilling the unity of an ever more polarised nation.

Unfortunately, though he is generally well-informed, O’Mahony misunderstands important aspects of how America works, as his article makes clear.

“Let the South ban abortions,” he writes, while explaining what a greater devolution of power might mean in practical terms. “Better it be banned in Alabama than a Republican Supreme Court ban it everywhere. Let New York and California ban guns and introduce an American State Health Service.”

A Republican Supreme Court will never ban abortion, and hardly any conservative expects it to.

Before the infamous Roe-v-Wade ruling in 1973, many states allowed abortion and many others did not. New York, for example, legalised abortion by passing a law in its State Assembly in 1970.

Since Roe was decided, the battle has not been over whether a “Republican Supreme Court” (there is no such thing) would outlaw the practice nationwide, but over whether the Court might return the issue to where it belongs: the state legislatures.

Knowing that they cannot win arguments about the most contentious issue of all in every one of the 50 states, the Democratic Party and the American Left has made defending this federal overreach a core part of their agenda for the last half-century, and have made an ever-expanding federal government their main objective more generally.

This is why the vast majority of Democrats reject any attempt to return power to the states.

As to his other points, New York and California already have strict gun laws passed by their state legislatures, and gun violence plagues many urban areas in those states anyway.

And there is nothing to stop a Democratic-run state from introducing their own version of Britain’s National Health Service if that is what they want to do – other states have already tried and failed to do something similar, and after all, trial and error is a vital part of how a federal system works.

Overall, O’Mahony’s argument is correct, even though he would make for a strange doctor: misdiagnosing the illness and its cause before prescribing exactly the right treatment.

To preserve the tranquility of the United States, the country should rediscover the virtues of federalism and resolve more of its contentious debates on a state-by-state level.

To lower the temperature of this and subsequent presidential elections, political power in the US should be devolved downwards to the states, and where possible, more decisions should be taken by local governments, or better still, individuals and families.

Not because the EU does it that way, but because federalism, along with liberty, is written in America’s DNA.

Democrats: You can’t trust a Trump coronavirus vaccine, you know

‘All will be well’? Only if the world acts to stop COVID