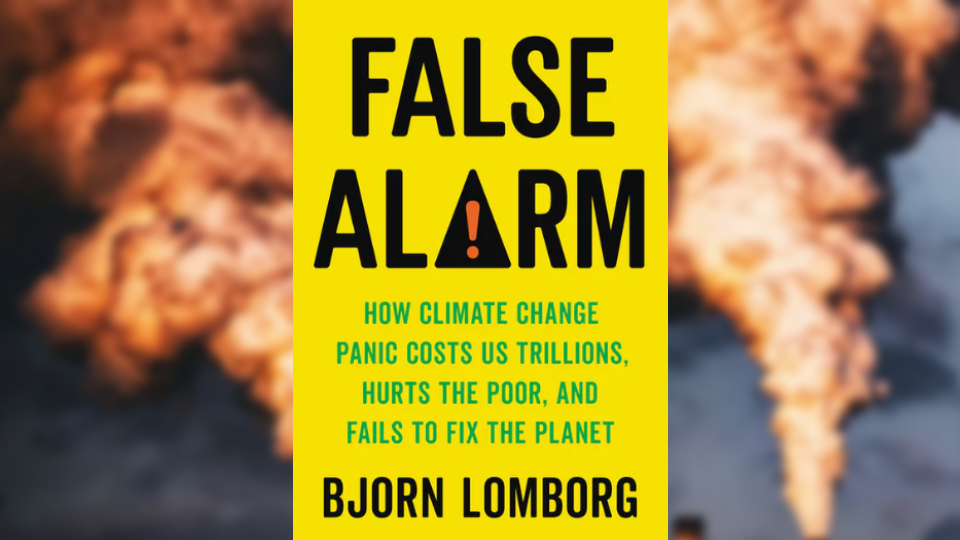 ‘False Alarm: How Climate Climate Change Panic Costs Us Trillions, Hurts the Poor, and Fails to Fix the Planet’ is the new book by the Danish political scientist and author, Bjorn Lomborg.

It has been almost 20 years since Lomborg shot to fame with ‘The Skeptical Environmentalist.’ In it, he laid out a convincing case that the widespread beliefs that our planet is in great danger are in fact unjustified when one examines the scientific evidence.

Now, Lomborg has honed in on the subject which is rapidly becoming the most consequential area of political and social debate: climate change.

The author is admirably clear in his writing style and very persuasive in his approach.

The risks posed by climate change, Lomborg argues, are exaggerated. Furthermore, the policy measures which governments around the world have embraced – such as the subsidising of solar and wind power – are failing miserably.

Most importantly of all, a continuation of this fear-driven approach will result in serious costs to the world’s population over the next century, particularly poorer people in developing countries who cannot enter the middle-class without access to the affordable and reliable energy which comes from fossil fuels.

In spite of the obvious trade-off, it has almost become an axiom that climate change is an existential threat to mankind, and that all measures which could be taken to cut emissions should be taken, regardless of the financial or practical cost.

The name of the vanguard organisation within the Green movement starts with ‘Extinction,’ and the demands of environmental campaigners are becoming increasingly extreme.

Just a few years ago, for instance, calls for a 50% reduction in carbon emissions over the next decade would have been dismissed as being completely unachievable.

Yet now, that target is part of a Programme for Government which Fianna Fáil and Fine Gael have happily signed up to.

These policy changes could not have occurred if a large segment of the population was not deeply worried.

A narrative this dominant inevitably seeps through to most of society. This is shown in polls cited by Lomborg which show that significant percentages of the world’s population – including four in ten Americans – believe global warming will lead to mankind’s extinction.

The alarmism is particularly evident among the young: a Washington Post survey last year showed that 57% of Americans between 13-17 feel afraid about climate change. Generation Greta is being radicalised by worry.

Here, as he has done in previous books such as ‘Cool It,’ Lomborg calmly examines the facts and argues that this extreme pessimism is unfounded, given the undeniable progress which humankind has made.

Since 1900, average life expectancy has more than doubled, from 33 to 71. Rates of absolute poverty and illiteracy have shrunk and child labour has become rarer.

On the whole, people are living longer, healthier, more prosperous and more peaceful lives than ever before, and there is a very good chance that this progress will continue, with UN researchers estimating that by 2100 average incomes will be at 450% of today’s levels.

This much is hard to dispute given the abundance of data available, but interestingly Lomborg also asserts that the health of the planet is actually improving in ways which benefit us substantially.

“In the past half-century, we have made substantial cuts in indoor air pollution, previously the biggest environmental killer. In 1990, it caused more than 8% of deaths, this has almost halved to 4.7%, meaning 1.2 million people survive each year who would have died.

“Higher agricultural yields and changing attitudes to the environment have meant rich countries are increasingly preserving forests and reforesting. And since 1990, 2.6 billion more people gained access to improved water sources, bringing the global total to 91%,” Lomborg notes. “Many of these improvements have come about because we have gotten richer, both as individuals and as nations.”

This is a core point in his overall argument. While many self-described environmentalists and socialists (these days, the two groups are scarcely distinguishable) claim that economic prosperity threatens the planet, Lomborg takes the opposite viewpoint.

Not only does greater wealth improve the quality of life, enhanced affluence also allows us to focus more attention on preserving the world around us, and enables us to take preventative measures to guard against challenges brought on by our changing climate.

To be clear, Lomborg is not a ‘climate change denier.’

A committed environmentalist, he refrains from eating meat, and welcomes the recent tendency to avoid giving the oxygen of publicity to those who dispute the science about rising temperatures.

The book contains a clear description of how the greenhouse effect works. As more and more carbon dioxide is released into the atmosphere due to human activity, the planet gradually becomes warmer, resulting in rising sea levels among other effects.

Although not all of the consequences are baleful – the increase in carbon dioxide in recent decades has boosted plant growth and contributed to a “global greening” across the world’s vegetated areas – Lomborg believes that climate change will have a negative impact overall, and insists it needs to be tackled.

He does now, however, believe that this is an insurmountable challenge, and he takes aim at those who have exaggerated the damage which is occurring.

In the wake of any extreme weather events, politicians and campaigners are quick to point to the enormous economic toll, which is automatically attributed to climate change and used as yet another excuse for supporting measures such as new taxes, the closure of high-emitting industries, anti-car policies or dramatic changes to farming practices.

This, to Lomborg, is a false alarm.

True, the costs related to increased flooding or forest fires have increased, and rare events such as hurricanes or tropical storms can also pose enormous challenges.

But this increased cost comes at a time when we are much better able to afford to repair what nature has wrought, and where our improved material conditions mean we are far less likely to be physically harmed.

As Lomborg observes, deaths from climate-related disasters have dropped dramatically over the last century, at a time when carbon emissions and temperatures were going up. In the 1920s, such disasters killed almost 500,000 people annually, but now claim fewer than 20,000 lives annually, in spite of the world’s population having increased fourfold over the last century.

Higher incomes make for better and more secure housing, and as the developing world continues to make economic advances, the numbers dying needlessly due to natural disasters will likely fall even further.

While increased economic damage over the next century is very likely, there is an explanation for this too. As the world’s population has increased, so too has the number of houses and the amount of infrastructure in place.

The same sized flood or storm today will cause more financial damage than it would have a century ago, but recent economic growth means we are better able to afford this.

One of the areas where alarmist media coverage has been most evident is the issue of rising sea levels.

Prominent media outlets frequently point to a future where many large cities are submerged below water, as if this was going to happen suddenly, and as if humans were powerless to take defensive action.

Here again, Lomborg draws attention to what should be obvious.

Significant portions of the world are already at or below sea level, and thriving regardless. The Netherlands and large areas of Vietnam, for instance, have long safeguarded low-lying areas by investing in dikes, dams and other flood protection measures.

As sea levels rise, a large amount of additional investment will be needed elsewhere in the next century, but again, this is far from being beyond the means of developed – and even developing – countries.

Apart from being critical of the sensationalist nature of public discussion on this issue, Lomborg also shines a light on the failure of existing policies and international accords to curb carbon emissions.

Faced with a catastrophe-centric debate, attention-seeking politicians have a remarkable record when it comes to making promises in this area, and a consistent record of failing to deliver results.

One of the most telling examples of this is the 2007 pledge by New Zealand’s former Prime Minister Helen Clark to make the country carbon neutral by 2020.

Clark’s promise earned her high praise in fashionable circles internationally, and yet the country’s emissions are higher now than they were then. In 2018, Clark’s fellow Labour PM and internationally-prominent progressive Jacinda Ardern made a similar carbon neutrality pledge, but wisely pushed the deadline out to 2050. The jury is very much out on the question of whether this will be achieved or not.

The greatest value of Lomborg’s analysis lies in his examination of the costs and benefits of existing policy approaches.

Given the consistent failure of solar and wind power to deliver results, he is deeply sceptical about large-scale investment in those areas, but he does have a number of policy recommendations, including: the dedication of far more resources to efforts to adapt to a warming planet; a universal but modest carbon tax; and a dramatic increase in R&D spending on new technologies.

Above all else, Lomborg’s message is that we need to view the problem differently. Climate change, he writes, “is not like a huge asteroid hurtling towards Earth, where we need to stop everything else and mobilise the entire global economy to ward off the end of the world. It is instead a long-term chronic condition like diabetes – a problem that needs attention and focus, but one that we can live with.”

Few of his factual assertions or policy recommendations could be fairly described as controversial, and yet Lomborg’s views seem positively heretical in an environment where environmentalism is the new dogma.

In this new reality, where every facet of government policy is likely to be impacted by how we respond to our planet’s changing climate, remaining out of this debate is no longer an option.

As such, it is well-worth taking the time to hear the views of a true humanist, a man who is confident that we have the ability not just to adapt and survive, but to prosper and improve as well.

The eugenic roots of abortion in Britain