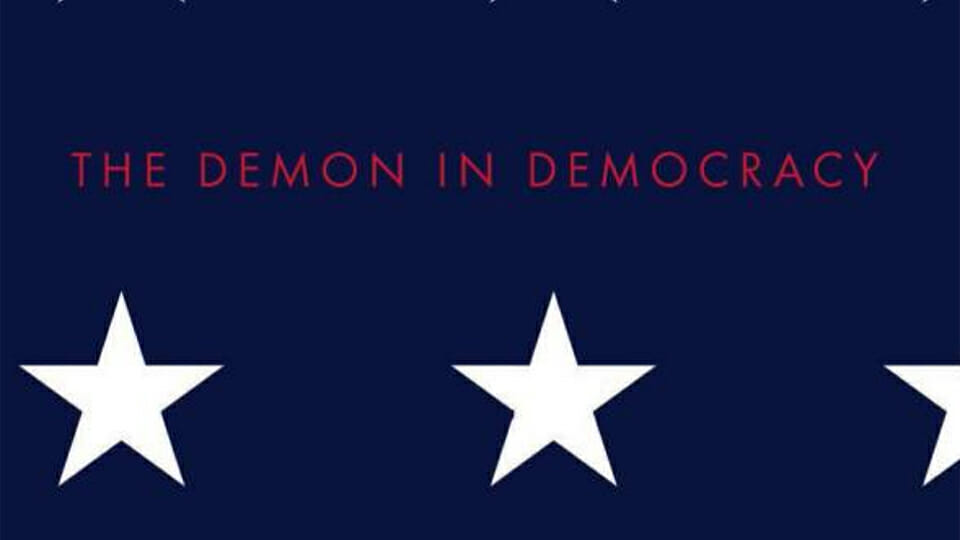 With concerns about the coronavirus ever-present in our minds, and many outdoor activities off limits, it is a good time to focus on some reading material which does not relate to the global pandemic.

‘The Demon in Democracy,’ written by the Polish philosopher-politician Ryszard Legutko, caused a minor stir when it was released in 2016. Four years on, the book’s central themes have only become more relevant, as the tensions between and within the democratic countries of the West have grown ever deeper.

During the Communist era, Legutko was among those dissidents who challenged the Soviet-backed regime which ruled his country with an iron fist.

Legutko now lectures philosophy at Jagiellonian University in Kraków (where Pope John Paul II studied and taught) and also heads up the conservative Law and Justice party’s delegation in the European Parliament.

From the time Poland joined the EU in 2004, Law and Justice governments and politicians have regularly been at odds with leaders of the European institutions as well as other European governments, a trend which has accelerated since they were returned to power in 2015.

Given that he is an intellectual standard-bearer for his party, it is not a surprise that Legutko pushes back hard against this, and is scathing in his assessment of many trends in modern day liberalism.

Having personally struggled against Communism, Legutko sees strong parallels between the ideology of those who ruled Poland between 1945 and 1989 and the mindset which prevails in most of the Western world today.

While he makes clear that there is no moral equivalence between Communism and modern-day liberalism/progressivism (a belief system which he refers to throughout as “liberal democracy”), he is not shy in pointing out similarities where he sees them.

“Both communism and liberal democracy are regimes whose intent is to change reality for the better,” writes Legutko. “They are — to use the current jargon — modernization projects.

“Both are nourished by the belief that the world cannot be tolerated as it is and that it should be changed: that the old should be replaced with the new. Both systems strongly and — so to speak — impatiently intrude into the social fabric and both justify their intrusion with the argument that it leads to the improvement of the state of affairs by “modernizing” it.”

The author divides his book into five key chapters — History, Utopia, Politics, Ideology and Religion — and analyses them in turn.

The grim persecution he and his compatriots endured in Communist Poland are never far from his thoughts, and he makes a direct comparison between the socialist regime’s burning desire to completely dominate civil society and the growing intolerance of modern liberals.

He cites several examples but any observer of the political and cultural scene across Europe and North America will have no problem understanding what he is getting at.

Every passing week brings with it fresh examples of challenges to freedom of conscience, expression and belief.

Today it might be the cancelling of a conservative speaker’s talk at a college campus, tomorrow it could be legislation banning silent vigils outside abortion clinics, the day after that, another Christian minister might find himself being prosecuted for having views on marriage which conflict with newly-passed and vaguely-defined ‘hate speech’ laws.

Those who call themselves liberal are rapidly becoming ever more intolerant of opposing viewpoints, and ever more willing to use the machinery of the state to bend individuals and organisations to their will. No dissent can be brooked.

“Not only should the state and the economy be liberal, democratic, or liberal democratic, but the entire society as well, including ethics and mores, family, churches, schools, universities, community organization, culture, and even human sentiments and aspirations,” Legutko writes.

He argues that this intolerance of other viewpoints can in part be explained by how adherents to the liberal democratic viewpoint view themselves.

Just as Marxists viewed their ideal state as the final step in the evolution of human history, many modern-day liberals have adopted an ‘End of History’ approach.

It follows on from this that those who refuse to conform to the new consensus should be viewed with scorn.

Legutko also argues that the liberal fondness for identity politics and the concomitant political measures to tackle perceived injustices represents a continuation of Marxist tactics, which are directed against the same enemies as opposed Communism in Poland and elsewhere.

“Both sides — communist and liberal-democratic — share their dislike, sometimes border on hatred, towards the same enemies: the Church and religion, the nation, classical metaphysics, moral conservatism, and the family.”

It is strong meat, and the sort of analysis which leaves little room for discourse with the other side.

Legutko sees that he is under attack. The values of his party and his Church are constantly being derided by political elites across Europe (and by a sizeable minority within Poland, it must be acknowledged) and his book is a powerful response.

His contribution is valuable and necessary for a number of reasons.

Firstly, Legutko’s insightful analysis of Polish society under Communism provides an insight into the attitudes of Poland’s controversial conservative government, as well as its counterpart in Hungary.

Years of assaults on both countries’ reputations by EU figures, left-liberal media outlets and the usual Soros-funded NGOs have left a stain on the reputation of these great nations which is thoroughly undeserved.

The words ‘Poland’ and ‘Hungary’ are now shorthand among European liberals for backwardness, authoritarianism, even fascism.

The alleged sins of Law and Justice in Poland and Orbán are too many to be listed, but include such antediluvian stances as opposing a further transfer of powers to Brussels, honouring the role of Christianity in shaping their countries’ identities, resisting abortion and gender ideology, and worst of all, opposing the sort of mass Muslim immigration which is designed to fundamentally and irrevocably transform whole societies.

For all this, Poland, Hungary and the Visegrád countries are despised.

The facts that these governments are democratically elected and many of their policies are broadly popular is irrelevant to the political and cultural elite represented by figures such as Guy Verhofstadt, Emmanuel Macron and Angela Merkel.

The mutual distrust between the populist conservatives of both countries and the Western liberal democrats whom Legutko rebukes has deep roots, and is to some extent attributable to the desire of the Polish and Hungarian governments to make a clean break from the Communist past, a process which can involve contentious steps such as, in Hungary’s case, the writing of a new constitution.

Few in the West understand that many Communist-era politicians — who had played key roles in their respective dictatorships — later went on not just to participate in post-Communist politics, but to lead several governments.

In Hungary for instance, Orbán’s predecessor as Prime Minister Ferenc Gyurcsány had been a leading member of the Organisation of Young Communists in the 1980s. Gyurcsány’s Hungarian Socialist Party was the direct successor to the one-party state which a youthful Orbán once worked to overthrow.

The fact that the Communist influence has not been fully removed from political life is jarring to many Polish and Hungarian conservatives, as is the (often accurate) belief that the EU’s governing class would prefer that the former Communist parties were in charge, given how amenable they are to ever closer union.

In addition to focusing on Poland’s road to freedom, this book also shines a much-needed light on the perfidy of those European liberals and socialists who did nothing to oppose Soviet tyranny in central Europe, but who have since developed a strong aversion to democratically elected governments in that region which dare to oppose them.

“The liberal-democratic West did not fight the Soviet empire and — with few minor exceptions — never had such intentions,” Lejutko states, after beginning his book with an account of his exasperation at travelling through the West during the Cold War and discovering that many self-described liberals were deeply reluctant to criticise Communism and in many cases were openly sympathetic to its aims.

That sympathy has never fully gone away, which is why the likes of Castro or Maduro never receive the same level of condemnation in liberal circles in the West that an Orbán or a Kaczyński will.

In this book, Letugko does a good job of explaining why that probably won’t change in future, either.

The enemy of your enemy is your friend.

Name: The Demon in Democracy

Jane Fonda: My expensive jewellrey at the Oscars is “sustainable”, you know